A year after the county first hired an outside company to manage its information technology department, the freeholder board renewed its contract with Green Technology Services of Pedricktown.

However, a lot has changed since that initial partnership.

After the county eliminated its IT department, Green Technology started handling all of the county’s technology needs.

The contract nearly doubles this year, going from $266,600 to $498,888, according to numbers provided by the county. However, officials said the contract that was signed last year was actually too low.

According to Freeholder Director Julie Acton, there was a discrepancy in the original contract between the number of computers the county said Green would be managing and the amount the county actually had.

Gary Green, president of Green Technology, said the contract was for 235 computers, but when they got in and did an inventory of the county network, there were actually 510 computers.

“When the RFP went out last year, the administration worked with the previous IT department to see what number of computers the county had,” Green said. “There were big discrepancies.”

They also have their hands on a lot more things now that they are the sole IT providers for the county.

“Here at the county, we are the IT department,” Green said. “We do everything related to their day-to-day operations … We’re the one’s they’re calling for support calls. We’re also doing strategic planning, network redesign and upgrading services.”

He said the increase in the contract is due to the sheer difference in the number of computers they are managing.

Although the contract will cost more this year, Acton said Green Technology has saved the county $1.47 million over the last year.

In addition to seeking out new grant funding, Green said his experience working with manufacturers and sellers helps him find the best price when the county needs to purchase new equipment. 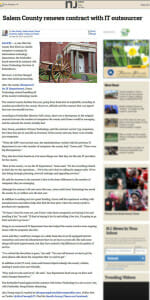 Going to an outsourced IT department has also helped the county resolve some ongoing issues with its computer network.

Acton said they would have outages on a daily basis due to an ill-equipped internet connection and network infrastructure that was at least 15 years old. She said some things still need improvement, but they have noticed a big difference in the quality of service.

“I’ve noticed the downtime is gone,” she said. “You can tell because we don’t get the same phone calls about the computers that we used to get.”

In addition to the IT work, Acton said Green helped redesign the county website, making it much more user-friendly.

“They took it to the next level,” she said. “Any department head can go on there and make changes themselves.”

The freeholder board approved the contract with Green Technology in a six to zero vote, with Freeholder Doug Painter abstaining.